Tammy and I hit the road to check out a campground in Swansboro NC, and took advantage of stopping by and checking out Hammocks Beach State Park which is off Highway 24 near Swansboro. 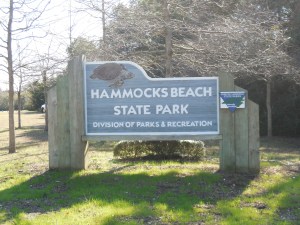 The state park is unique that the visitors center, kayak launching area and dock for ferry boat is the only thing on the mainland.  The main attraction is the three primitive  islands (Bear, Huggins and Jones) that are located off the mainland with one side facing the Atlantic ocean and the other being in the marsh lands. Bear Island is about 2.5 miles from the ferry dock and has primitive backpack camping, a designated swimming area, bird nesting areas, picnic shelters bathhouse and a concession stand which is open Memorial Day through Labor Day.

Bear Island contains 892 acres bordered by the Atlantic Ocean to the south and by salt marshes, estuarine creeks and the Intracoastal Waterway to the north.  It has about 4 miles of white sandy beaches, shrub thickets and maritime forest.  Early in the twentieth century, Dr. William Sharpe, a neurosurgeon from New York, came to Bear Island to hunt.  He fell in love with the area and brought it after his retirement.  He intended to give the land to John Hurst who was his long time hunting guide.  Hurst persuaded him to donate it to the North Carolina Teachers’ Association, which was an organization of African American teachers.  In 1950 the group attempted to develop the Island, but limited funds and the island’s remoteness rendered their efforts unsuccessful.  In 1961 the association donated the island to the state of North Carolina for a park.

Huggins Park is located east of Bear Island, at the mouth of Bogue Inlet and is visible from downtown Swansboro. The island consists of 115 acres of upland area and 96 acres of lowland marsh.  It is home to a maritime swamp-forest and is listed as a “Globally Rare and Significant Area.”  It is ric in North Carolina’s  coastal history being a American Indian fishing and hunting ground to being home to a Confederate six-cannon battery from 1861-62.

Jones Island has 23 acres, located along the mouth of the White Oak River and is visible from the Swansboro Highway 24 bridge.  It is a unique coastal fringe evergreen forest island containing a small wetland area. The eastern painted bunting, a considerable rare breeding bird for North Carolina is known to nest there.

We took a few minutes to visit the Visitors Center and browse the exhibits and informationthey had on the islands about the local birds and sea shells that are found in the area.

Checking out the displays 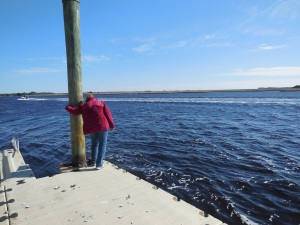 This is at the kayak launch looking toward one of the islands.

Most of your state parks have hiking trails, well this one has kayaking trails instead.  They have marked trails though the marshy wetlands.  Two lead to Bear Island,  one takes you to the east side of the island and the second branches off the first and follows the island along the sound front to the ferry basin.  The third takes you around Huggins Island.

If you like backpack camping along with canoeing or kayaking, this would be a good state park for you.  The wind was blowing hard the day we were there and it was cold.  This definitely would be a warm, calm day adventure place.

So if you are ever in North Carolina around the Jacksonville, Camp Lejeune, or Swansboro areas be sure to check this state park out.

Oh, the campground we went to look at was a bust, we’ll be in the Myrtle Beach SC area for Easter.

Thanks for stopping by and please come back!